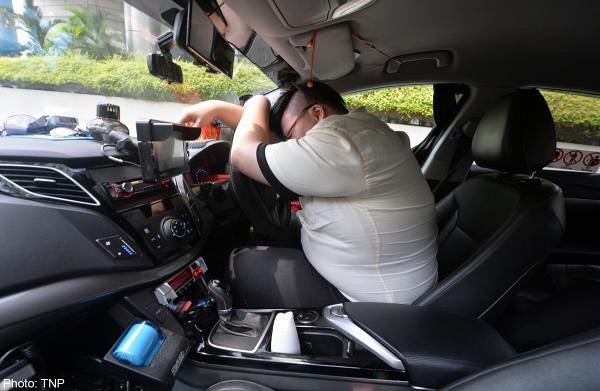 Cabbies new to the job are usually the ones more likely to stretch themselves, said Mr Ang Hin Kee, executive adviser of the National Taxi Association.

He said: "Many new drivers who have not driven before may not realise that they can damage their health if they don't look at this as a long-term business.

"They think their bodies can take it and push themselves to drive long hours. When you overstretch the rubber band, it will break at some time."

It is only when the drivers fall sick that they realise there is a greater price to pay, in terms of the daily rental and loss of income on top of their medical bills, he said.

Other common afflictions that cabbies are prone to are "postural mechanical issues" due to prolonged sitting and chronic conditions like high blood pressure and high cholesterol, said Dr Clarence Yeo.

The general practitioner at Killiney Family and Wellness Clinic explained: "They probably have a tendency to eat out most of the time. Naturally, diet and lifestyle may sometimes not be the most healthy as a result."

Mr Ang, who is also an MP for Ang Mo Kio GRC, reminded the public not to think that taxi drivers are skiving when they see taxis parked outside coffee shops.

He said: "We should be glad that they are giving themselves a mental break in order to be able to drive on. Not many people can handle 12 hours of driving.

"While the study focused on taxi drivers, the same could be said for courier and pickup drivers, or delivery guys.

"Anyone who makes a living on the road will need to be more conscious of the importance of frequent short breaks."

While they wait for their taxis to be serviced, cabbies from ComfortDelGro (CDG) and SMRT can go for health checks at CDG's Loyang engineering centre and SMRT's Woodlands service depot respectively.

Those found to have chronic diseases will be advised to see their own doctors. No medication will be issued.

To better understand the general working and health conditions of taxi drivers, a group of researchers from the Saw Swee Hock School of Public Health at the National University of Singapore conducted a study on random cabbies.

It is the first local study that specifically evaluated the risk factors of cabbies' driving. A total of 231 taxi drivers were approached while they were waiting for the maintenance and repair of their taxis, or to pay their monthly rental fees.

While the researchers said the results could be used as a baseline for future studies, they acknowledged that one main limitation was participation bias. Of the 340 cabbies they had approached, 231 agreed to the survey.