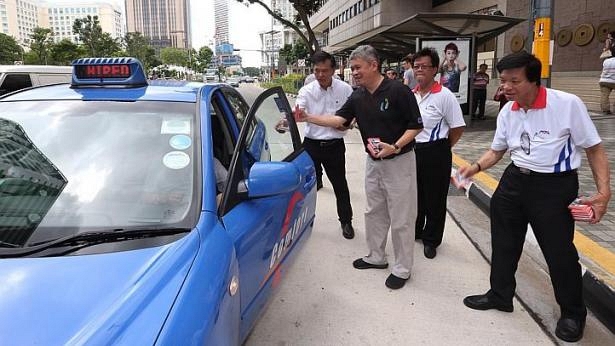 SINGAPORE – The use of closed-circuit television (CCTV) cameras on the roads has led to more taxi drivers getting caught for stopping illegally for passengers.

The National Taxi Association (NTA) said yesterday that from June last year to March this year, more than 280 cabbies received summons from the Land Transport Authority (LTA) at 30 locations where the cameras were installed.

During the same period in previous years, the number of summons issued at these areas was "negligible", said the association.

To reduce such incidents, it launched a campaign yesterday targeting both taxi drivers and passengers.

The association plans to distribute about 10,000 tissue packets with instructions on how to safely hail and alight from a cab.

Instead, passengers should try to get a taxi at the nearest taxi stand or along building driveways.

Cabbies are advised to avoid dropping off passengers or stopping for those flagging cabs in these areas.

NTA executive adviser Ang Hin Kee, who gave out 1,000 tissue packets with other NTA members on Rochor Road yesterday, said: "We need to advise commuters that it is not that the drivers do not want to pick them up, but there are cameras for good reasons – so that traffic flow remains smooth."

Mr Henry Tay, 45, who has been a taxi driver for eight years, said some passengers complain to the LTA when drivers do not stop for them at the illegal spots.

"They may not state the area they were waiting at," said Mr Tay.

"I feel it is not fair to me because it's my word against theirs."Mr Ang said the NTA is working with the LTA on locations that need more taxi stands and is talking to third-party taxi app developers to help tell people which roads drivers are not allowed to stop at.

Clerk Jenny Hu, 61, was trying to hail a taxi on Rochor Road yesterday when she was told she could not do so. "I didn't know (about the cameras), and will be more considerate to taxi drivers next time. They also have to make a living," she said.

You have reacted on "More taxi drivers caught stopping illegally for..." A few seconds ago